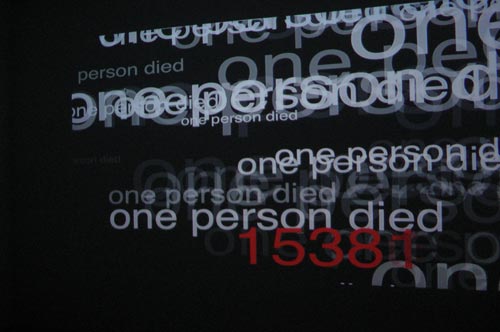 Every day, in the news, a large number of people are declared dead: 50 in an attack, 4000 in a massacre, 1.5 million in a Genocide... These victims are not simple numbers. Each one of them is a unique and valuable being, regardless of his place of origin. One person died is dedicated to each one of these victims, especially those of genocides, be it Rwandan, Kosovar, Khmer, Jewish, Indian or Armenian. The installation offers visitors a moment of reflection on a universal subject that speaks of life and its value.

Video clip of the projection

With the help of an algorithm, the phrase “One person died” repeats itself in different sizes and colors. The configuration changes constantly, but the phrase stays unchanged. A digital counter registers the number of repetition. Once the number reaches 1.5 million, the the counter restarts. 1.5 million is in reference to the number of victimes of the Armenian genocide of the beginning of the 20th century. Programming: Laurent Novac, HE-Arc ingénierie