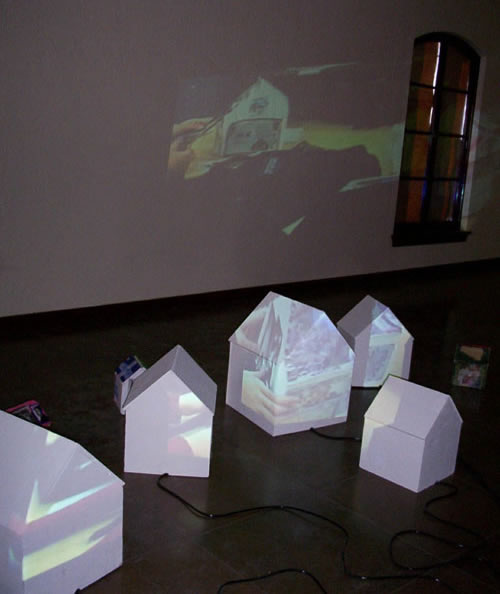 Our Stories is a multi-media audio installation created in collaboration with community youth. Stories are told by a group of culturally diverse high school students.

Five small-scale white houses create the main visual structure of the installation; contrasted with black electrical cords that act as lifelines. The visual part is minimalistic and the concentration of the piece is on the voices, the diverse voices of youth, in their original languages.

Each house has a sound system, which transmits a narrative in a specific language. Participating youth wrote stories about themselves, which they read in their native languages. Narratives were recorded and transmitted through the sound systems. A video of the students complements the installation as well as a wall with the printed stories as a visual component of the show.

The viewer can hear the voices as a whole or individually, each time experiencing a different combination of languages. They may or may not understand all or some of the languages, but they will experience the differences and the possibility of their coexistence in an environment.

Our Stories creates an atmosphere to showcase some of the languages spoken in our community, or in a more abstract way, to experience the sounds of various languages. Another idea of the project as a whole was to create an atmosphere for the youth to express themselves and learn about each other. During the workshops students interacted with one another and tried to be more accepting, something that is lacking in our society.

More than 50 students, in Glendale, California, participated in workshops conducted for Our Stories. The outcome of the workshops was stories, sound recordings in 11 languages (Armenian, English, Farsi, French, Goujrati, Korean, Russian, Portuguese, Sinhalese, Spanish and Urdu) and artworks. All stories are translated in English, Spanish and Armenian.