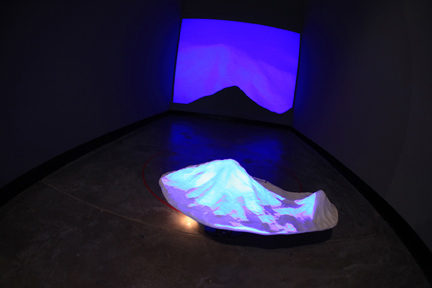 The mountain comes to me

[...Alina Mnatsakanian, an Iranian with Armenian roots, uses video installation (The Mountain Comes to Me) to speculate what might happen if countries, instead of trading cultural icons or diplomats, would exchange their highest mountains like Switzerland's Mont Blanc for Turkey's Mount Ararat. In her mind such exchanges might dissolve borders and end perennial questions of belonging, and the sense of longing for places that have become more of an inner vision than viable destination of return…]
— Daniella Walsh, Art Ltd 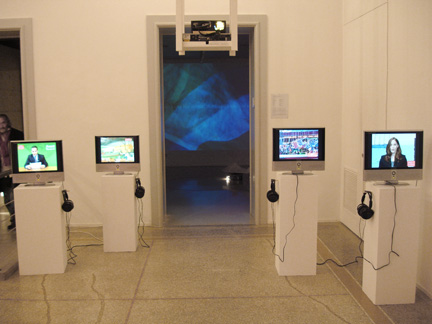 Concept
The mountain that I address in my installation has an important role in my consciousness. Unlike the Swiss mountains, I haven't lived in the vicinity of this mountain, but my origins and my identity are somehow connected to it.

The mountain comes to me"The mountain comes to me" is about mount Ararat, this heroic mountain sitting still in the South East corner of Turkey.
This ancient volcanic mountain has a long history of belonging. Armenians are one of the first "hosts" of this mountain, dating back to 3-rd millennium BC. Georgia, Iran, Russia and Turkey took turns in adopting Ararat. Last time Ararat was part of Armenia from 1918 to 1920. One can see mount Ararat through windows of any house in Yerevan, capital of Armenia, but it's just a view and a one sided one. The other side of the mountain can only be seen from Turkey. Borders have moved around Ararat for centuries, with the desire of including this natural icon in the boundaries of different countries.

Besides its long love affair with Armenians, some think of Ararat as the landing ground of the legendary Noah's arc and consider it a holly mountain. So, in a way, Ararat has a universal appeal.

Instead of presenting the romantic/enigmatic view of the mount Ararat, this installation proposes a temporary loan of this holly mountain for a tour of the world, a virtual move with the promise of return to its actual location at the end of the journey of course.